The Battle of Henderson Ville

A solo game of Fistful of Lead - Galactic Heroes

The NSL wants to state an example on the Rebels hiding in the war-torn remains of the small town Henderson. The Marines' mission is to kill the Rebel's Leader who has proven herself as being a thread for the NSL's supply lines.
The Rebels on the other hand want to kill at least one of the armored Marines to loot their equipment and to send a motivating sign to other resistance groups. 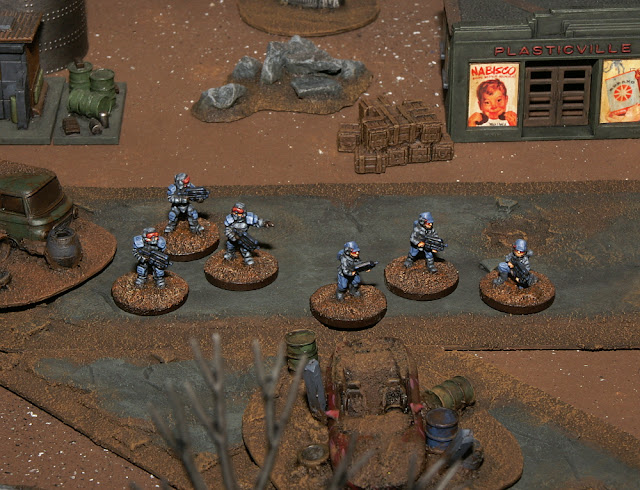 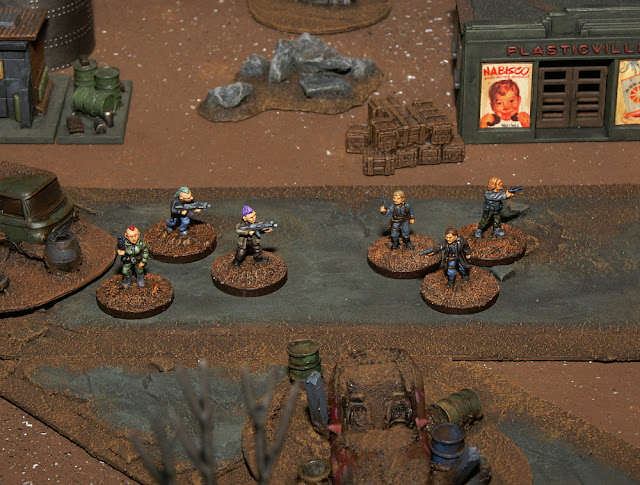 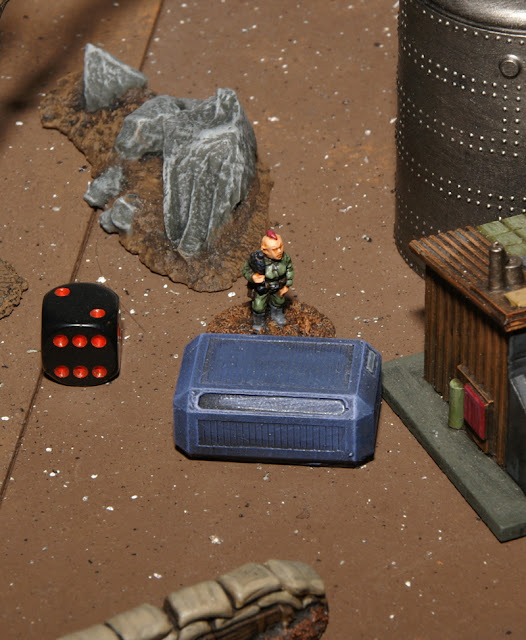 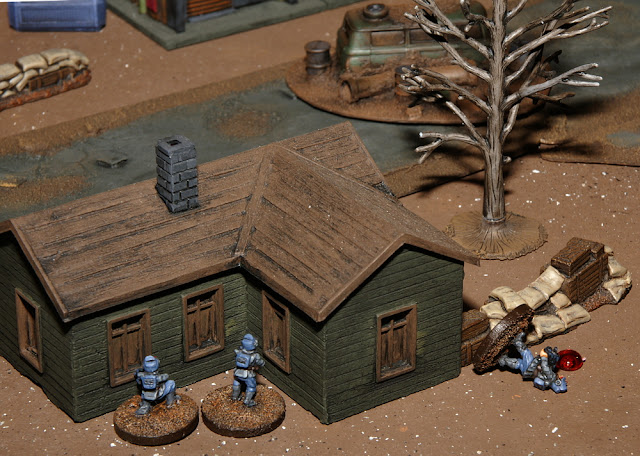 The Rebel leader steps out of the shadows and proves his deadshot ability. One Grunt peeking over his cover receives a headshot and drops dead. His comrades run for cover behind the ruinded house.
Red die is drawn – turnover.

Turn 2
A NSL Regular moves and creeps into cover behind a wrecked car. The Rebel Grunts turn around a corner and open fire. After two hits the well armored Marine is shocked and wounded.
Trying to cover his wounded mate the second Marine burst fires into the Grunts only causing a single shock result.
A Rebel Ganger is turning cautiously around the old post office and runs into the conscripts fire. One wound.
The Rebel Leader reappears and misses the Captain with her first shooting attempt.
Red die is drawn – turnover. 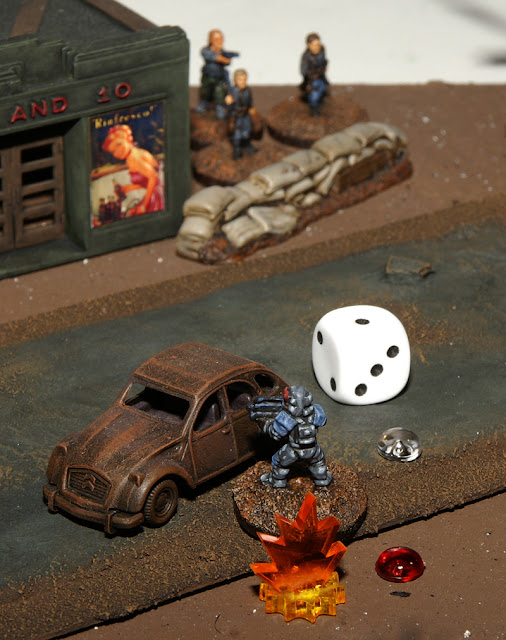 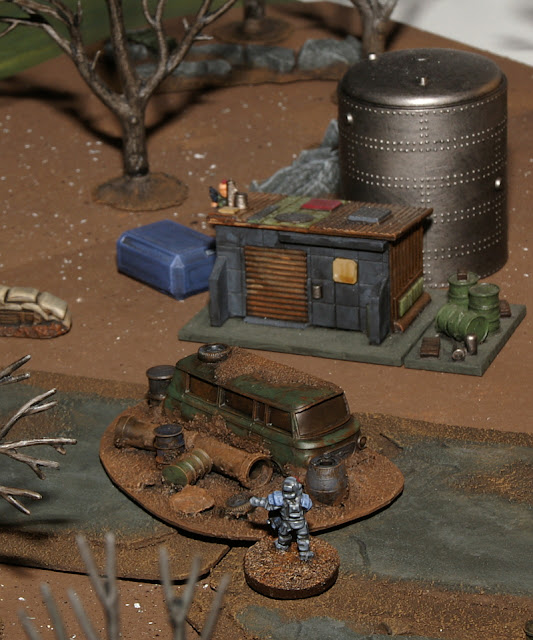 Turn 3
It's the Rebel's Leader who starts. Another two shots on the NSL Captain who takes only a shock marker.
The NSL Captain reacts and storms across the battlefield missing that annoying woman.
The triggerhappy Marine on the other hand reloads and burst fires again into the Grunts, killing two of them! The last one flees into cover.
The wounded Ganger shoots twice hitting both NSL conscripts! They drop dead to the ground.
The other Ganger aims at the NSL Captain missing him miraculously.
Red die is drawn – turnover. 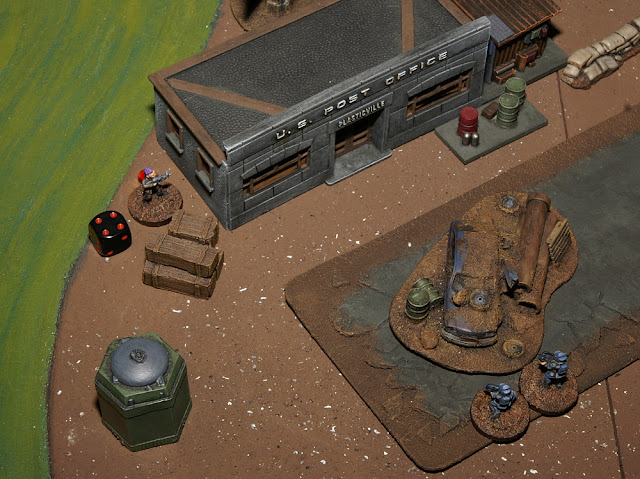 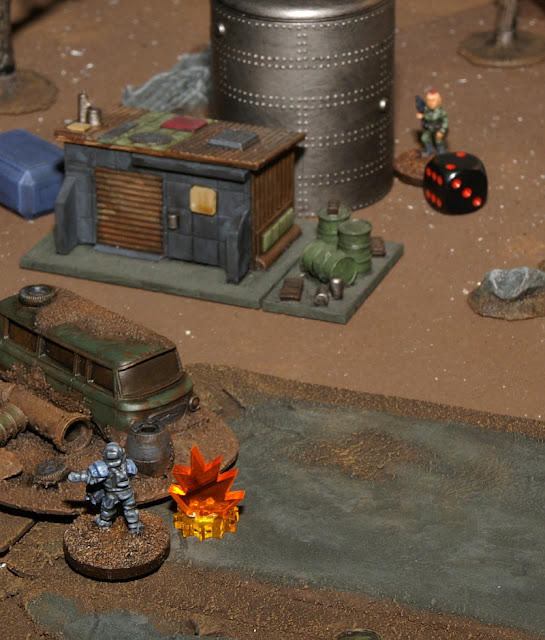 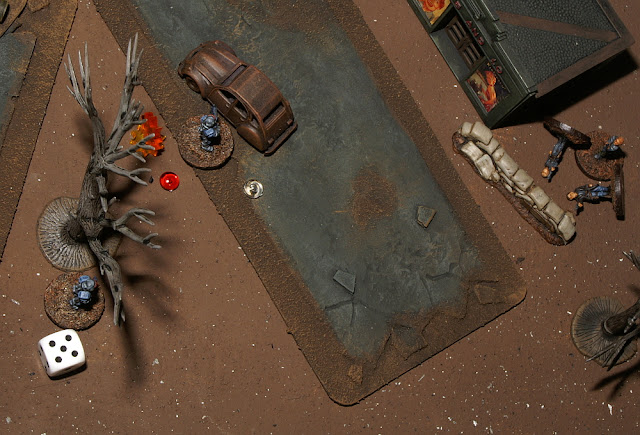 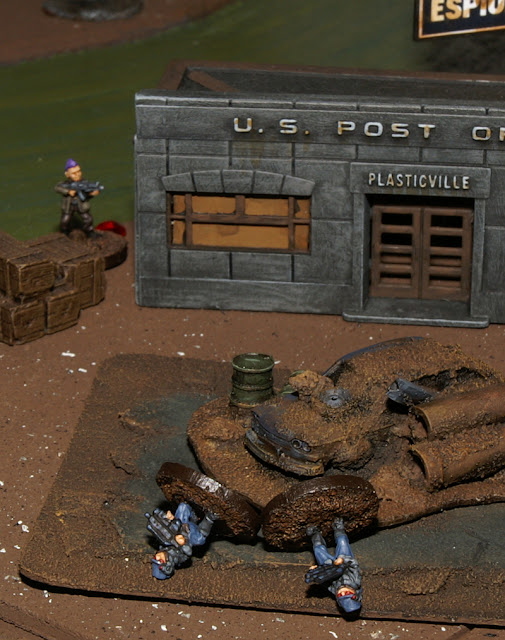 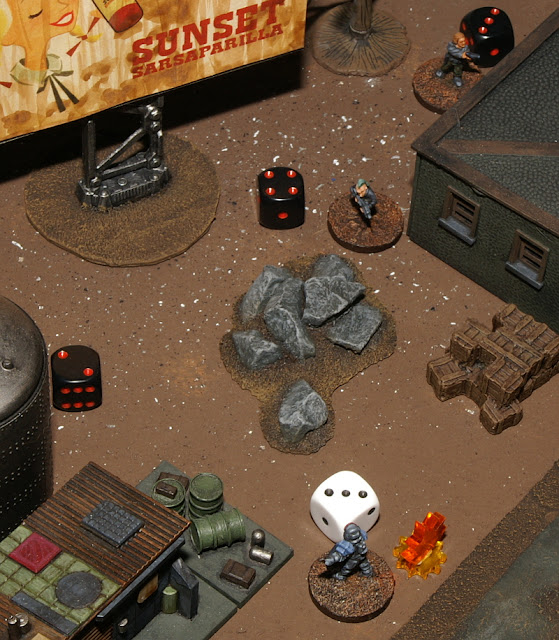 Turn 4
The Rebel Leader acts first and misses the Captain again. She flees into cover.
A Rebel Ganger fires at the NSL Captain causing a shock and a wound on him!
Red die is drawn – turnover.

Turn 5
The NSL Captain tries to calm his nerves but doesn't manage to remove any shock marker, also he misses the Ganger.
A NSL Marine hastens to save him, putting a bullet into the Ganger's brain.
The Rebel Leader cannot get rid of her shock markers and flees.
Red die is drawn – turnover. 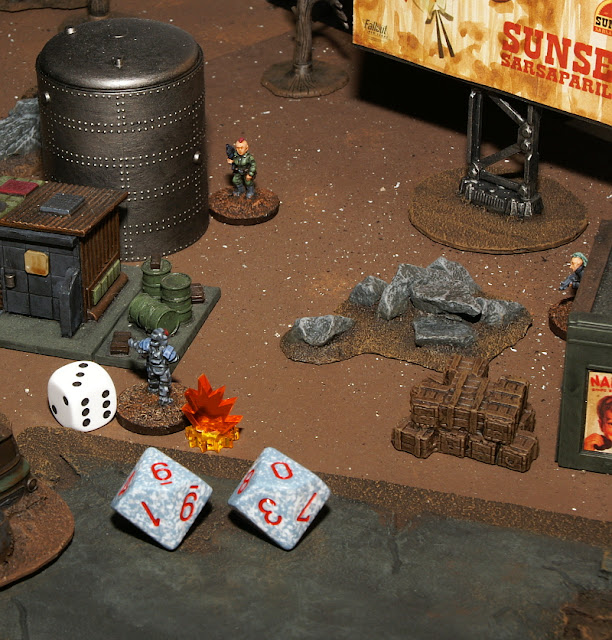 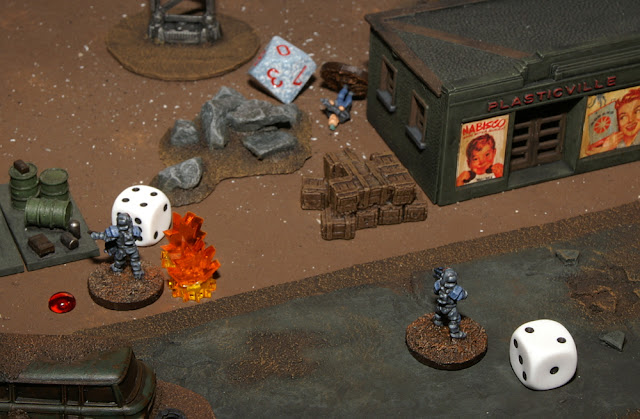 Turn 6
The last Rebel Grunt desperatly shoots a the Captain and misses. He's being killed in the Captain's counter fire.
Red die is drawn – turnover. 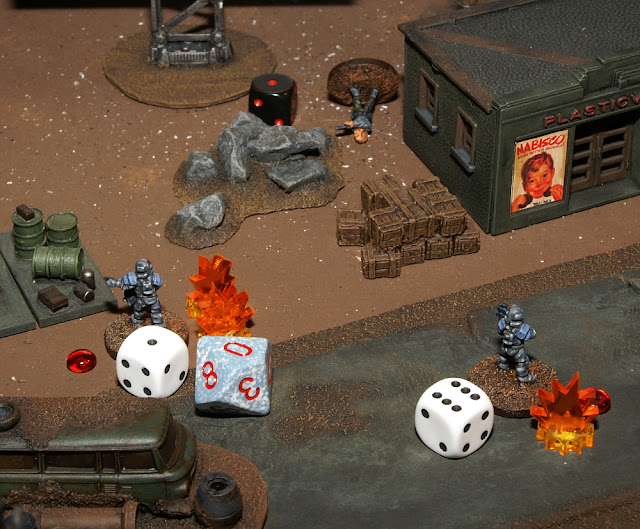 Turn 7
The last Ganger steps out of his covered position and shoots at long range. Of course, he misses.
The Rebel Leader misses as well and runs deeper into cover.
Red die is drawn – turnover. 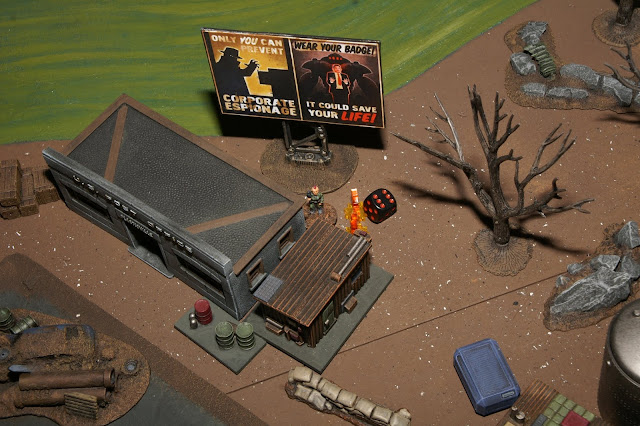 Turn 8
The last Ganger changes his position to get closer to the Marines. The NSL Captain pursuits the Rebel Leader, also does another Marine.
Another Turnover makes it impossible for the Rebel Leader to defend himself!

Turn 9
The NSL Captain, wounded and still under shock aims and hits – causing the first wound on the Rebel Leader!
A Marine follows after, only adding another shock marker on the Rebel Leader!
In a desperate attempt to take at least the Captain with her, the Leader shoots twice but misses both times.
The wounded Marine shoots and misses.
Red die is drawn – turnover. 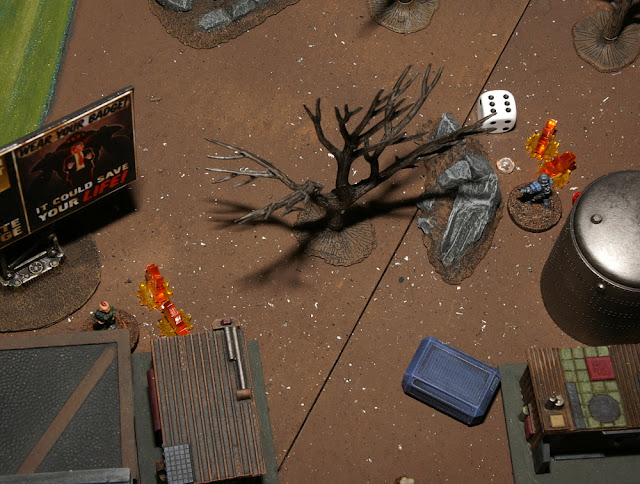 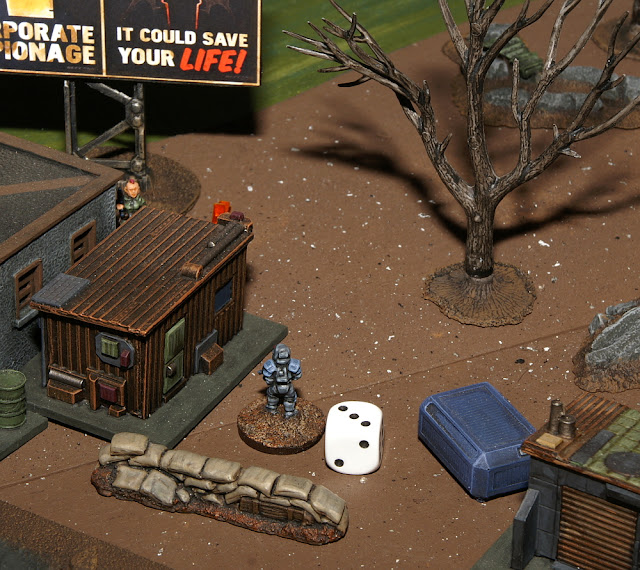 Last Turn
The Marines go first. Bam! The Rebel's Leader dies under the precise shots of the Elite troopers. The remaining Ganger flees into the night to live another day! 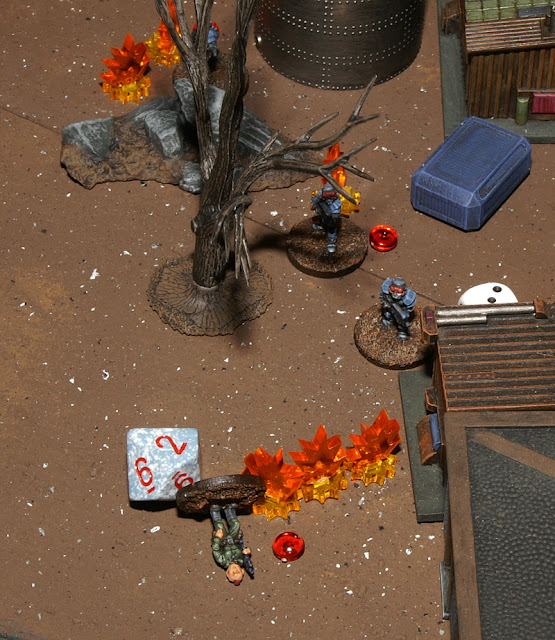 The game was great fun and my primitive solo mechanics worked well enough! I chose FFOL Galactic Heroes because of it's simplicity and elegant intuitive rules. I think it was a good choice and I will order Wasteland Warriors as soon it's available! I played with these cards as a game aid: 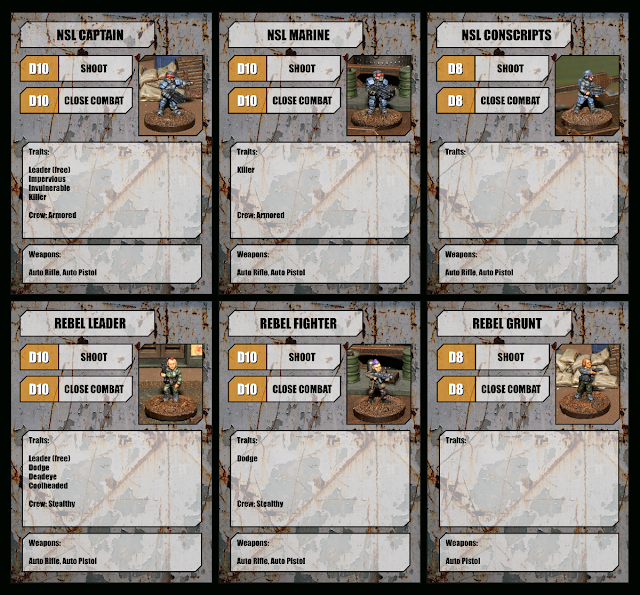 Whoa... that was a quick one. After two days of printing and painting, I have five Dark Angels ready for battle. On my desk there are Assaul...