We had our first game of Fireteam Andromeda and it played like a breeze. Even not knowing all the rules by heart we managed to finish our 1000 pts. battle in two and a half hours. The rules are quite easy in terms of shooting and close combat mechanics, but we had to play two turns to fully understand the command points system which we found to be enriching the game experience very much.
Each army had to take and hold three objectives all worth different amounts of victory points. The opponent was not aware which of the possible targets was the priority for the enemy. This way we had a close fight full of suspense for quite some time. It was not clear who would win until the american units collapsed under german fire.

Both armies deployed their units taking advantage of the area's cover. After receiving their orders vehicles and troops advanced into fighting positions trying to seize the three objectives.


The Americans managed to take the red objective (VP 8) quite soon in the first turn and didn't give it away until the end of the fight. The green objective was being reached simultanously by the German Schocktroops and some GIs. The poor guys were no match for the well trained elite warriors of the Reich. But the boys held out long enough for the Jackal walkers to arrive.
On the western half of the table started a fierce firefight between the german weapon teams and a M3A1 scout car.
In the eastern half the Panzer IV-X and one of the Shermans dueled each other. In the end one Sherman was disabled and the Spinne Panzermech and the Panzer IV took the opportunity to advance into the western area of the table where they challenged the other US tank.

The second Sherman had more luck and disabled the Panzer IV and inflicted a wound to the Panzerschreck team as well. Also, the Jackals charged the Schocktroops! A fierce battle between the metal monstrosities and the power armored troopers began. The Jackals finally won in close combat but all of them suffered lingering damage during the fight.

The Spinne managed to get two lucky shots on the second Sherman and managed to wipe out the tank. This certainly was the turning point of the battle since the Americans were out of real tanks while the german Panzer IV managed to get rid of it's disabled condition. The US Heavy Infantry and the Command Stewart managed to take out the Spider but fell both prey to the german MG drones and Panzer IV shortly after.


This disastrous event left the Americans with a meager 4 command points while the Germans still had plenty of options. The Panzer IV-X took out the Jackals and freed the way for the Grenadiers going for the green objective.


I played the Americans and even being the loser I enjoyed the game very much. We had a game of Gruntz a month ago and decided both that we find Fireteam Andromeda the better ruleset for our needs. The combat mechanics just feel right and guarantee a smooth and quick battle. After two turns we felt being in the flow.
The command points system was not that easily to get first, but turned out to be the biggest part of the fun. Deciding to spend points on activations or to save them for reactions brings a lot of tactical depth into the game. Also it keeps everybody involved into the action at all times, since there is always something to think about.
Preparation was also no problem since units are easily made even without an app doing the maths. I allready had a good feeling about Fireteam Andromeda after reading the rules. Now I'm sure that it is my ruleset of choice for platoon level games. It has the warhammer feel, lets me build well balanced units worth their points and throws in very clever mechanics in terms of command decisions.
We didn't even try Artillery, Orbital Bombardement, Electronical Warfare or Airstrikes, so there is a lot more to discover and try out. I highly recommend the rules for everybody who wants to stay on the Warhammer side without having to buy those new codices every two weeks. Go to Wargame Vault and grab those rules for 12 bucks. It's all you'll ever need.

And now for the US Boys who make use of small agile units and cheaper vehicles allowing them to field more shiny toys. Fireteam Andromeda lets you tailor a lot of different units and could be customized easily if really needed. We'll play in the afternoon today, I'm really curious if the rules turn out as great as I imagine them. Here's the list. 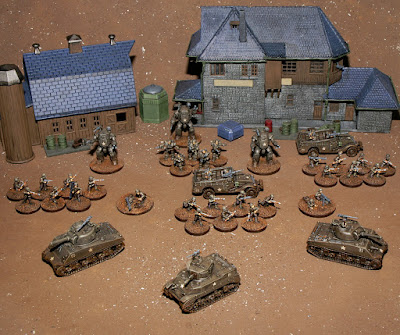 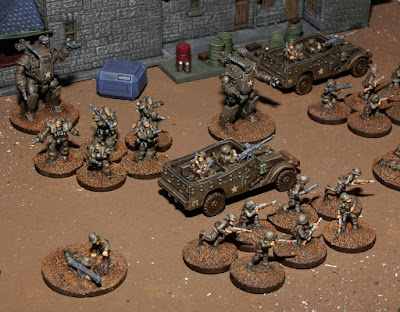 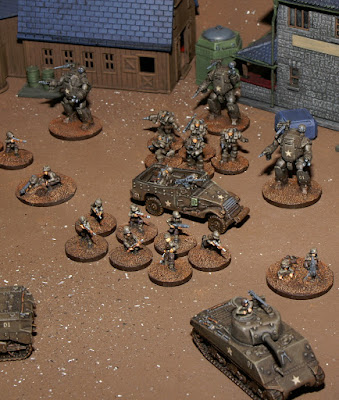 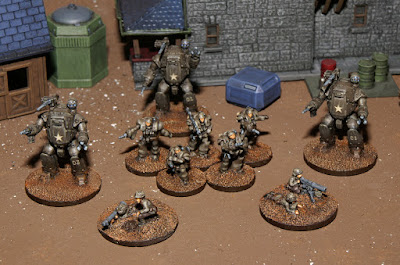 And some more unit cards: 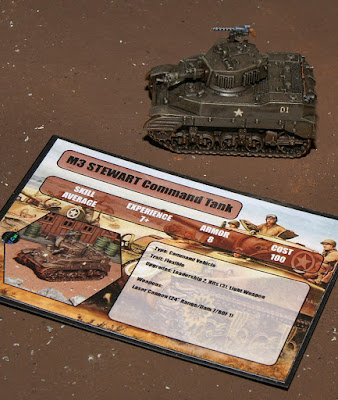 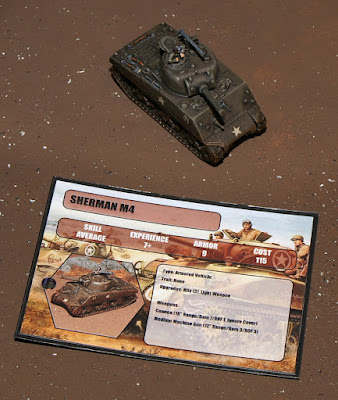 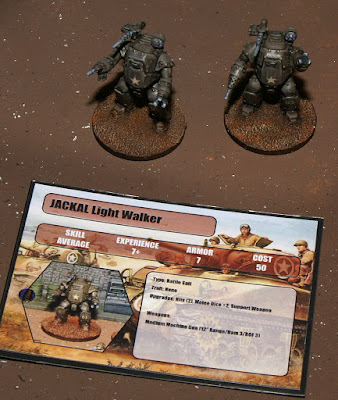 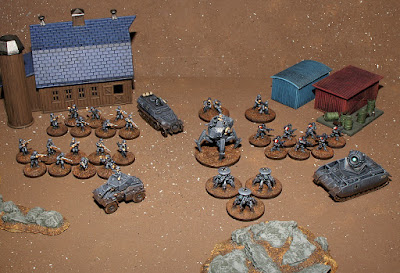 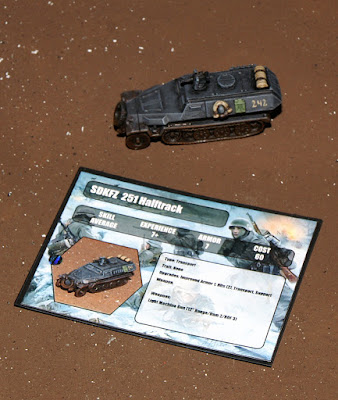 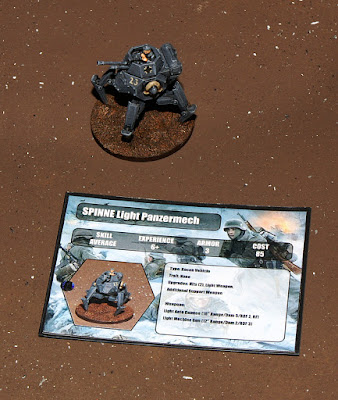 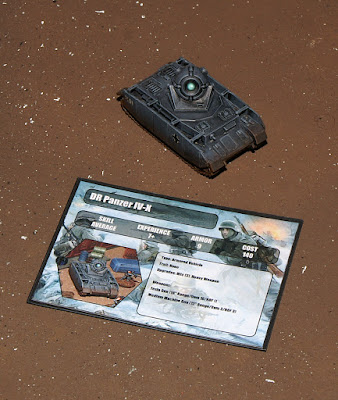 Some pics of my insurgent force. Figures are a mix of GZG and Assault Publishing, who are sadly oop now. The cars are 1:87/H0 scale models with some plastic card and Dark Future weapons added. I will expand the army with stuff from The Scene and Rebel Minis soon. 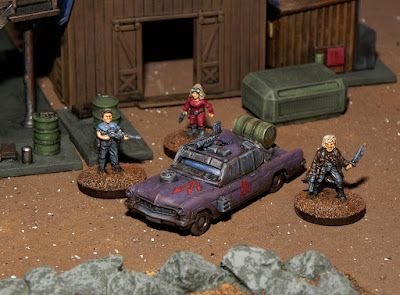 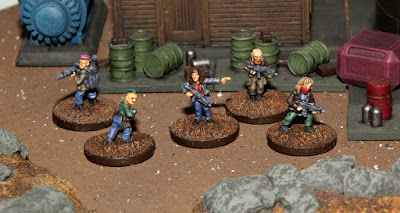 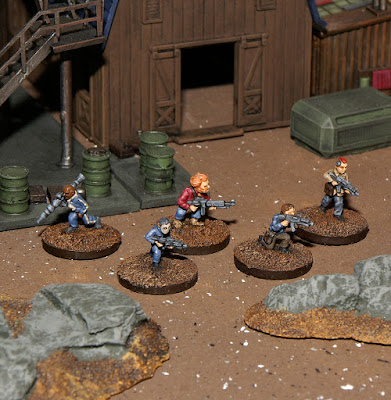 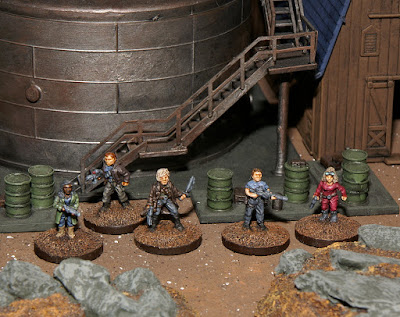 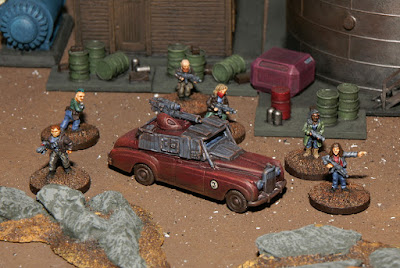